We are in the beginning stages of building a backyard cottage, and one of our big tasks is to replace and then demolish our current shed. Amy found some plans for a smaller shed that fits in our sideyard and we've been working on it for the past month. Here are some pics: 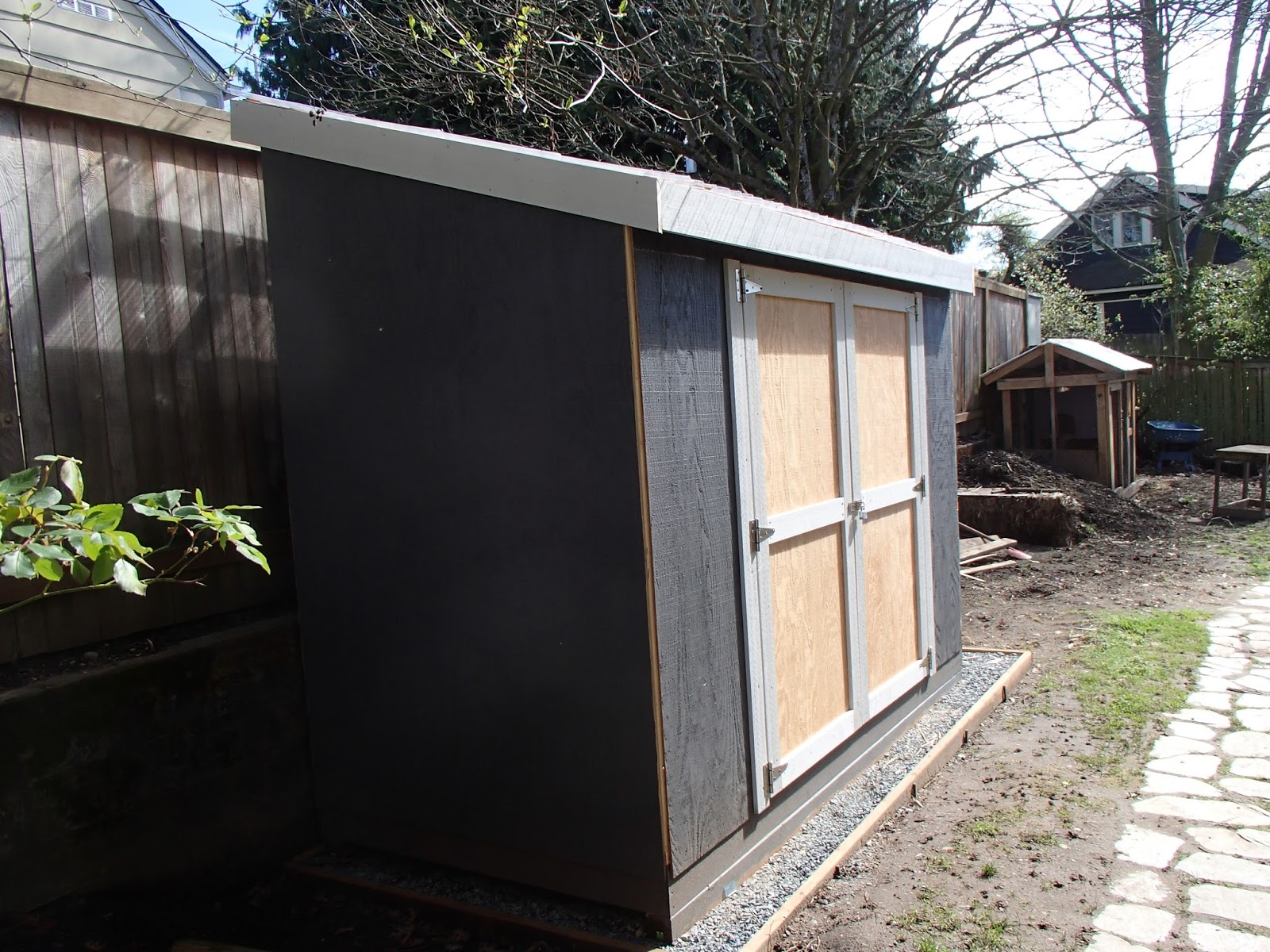 The shed is nearly finished. We just need to paint it, instal the plywood behind the built in shelves, and then move the bikes and tools into place. This has been a fun project, but I'm glad I wont' be building the cottage too!
Posted by Matt at 11:34 AM No comments:

A Visit from an Old Friend

Last Tuesday my friend Andy Guss and his family stopped by our place for a visit. They were on the last leg of an epic West Coast road trip, and we had planned on spending a fair bit of time together, but unfortunately we had already committed to joining our friends Brent and Heidi on their boat for a trip through the Gulf Islands of Canada. Nevertheless, we were able to spend a few hours visiting and catching up on the last 14 years (!).

In that span of time, we've both started families, become somewhat established in our careers and in our communities, and had numerous adventures and misadventures. I could easily have talked with Guss and his family for many, many hours, but alas, we had our block party and he had to join family in Burien for dinner. We are looking forward to seeing them again, hopefully soon.

We took a shakedown cruise on Raven last weekend to Blake Island. Blake Island is a Washington State Park between Bainbridge and Vashon Islands in Puget Sound, about 8 miles south of Shilshole Marina. We will be taking an extended cruise through the San Juan Islands later this month, and wanted to run Raven through her paces, figure out what needs fixing, and learn how to do several things that are new to us. Blake Island is a nice destination, not too far away, and we thought it would be a good testing ground.

For this trip, it was just our family plus Dick. Dick is heading out to the islands on Saturday, so he was even more motivated than us to get Raven in ship-shape for the cruising season.

We met at the boat on Friday afternoon. We stowed our personal gear and provisions, put the dinghy in the water, shipped the outboard, and attached the bridle to the stern cleats for towing. Unfortunately, there was very little wind--about 2 knots--and that was right on the nose, so we ended up motoring the whole way.

We entered the small breakwater at Tillicum Village, and a State Parks volunteer directed us to a 30' stretch of dock. Raven fit, but it is pretty shallow in that particular portion of the basin. We looked at the tide tables, and a -1.6 tide was in the cards for the following morning. We would hit bottom if we stayed, so we warped our way out of the breakwater and found a mooring buoy. After a quick spin around the anchorage in the dinghy with the boys and some s'mores, we all settled down for the night.

At first, all was very peaceful. Then the first ferry wake hit us. Blake Island is just south of Rich Passage, and ferries run through it on the Seattle/Bremerton run. Their wakes aren't extreme, but were enough to wake me up several times. The real fun began when the wake from the first commercial ship (tanker? container ship?) hit us. We must have rolled 25 degrees to each side, and it was so intense I thought I would fall right out of my berth. That was not fun, and no one (except maybe Lochlan) got much sleep.

The next morning was great. We woke up to a surprisingly warm, foggy morning, and after breakfast ferried ashore in the dinghy. We explored Tillicum Village, hiked through the woods, and had a great time beach combing.

We learned a lot on the trip--how to fill the fresh water tanks, tow the dinghy, attach to a mooring buoy, cook while underway, use the dinghy, pump out the holding tank, etc. We also learned that the anchor light does not work, and the anemometer sticks. So, I'll be going aloft tomorrow to fix those.

Here are some photos of the trip. We are already looking forward to exploring the San Juans! 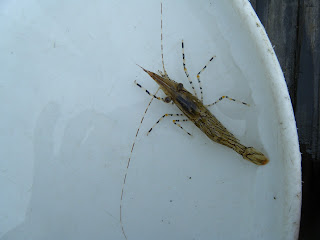 A shrimp Liam caught in one of the tidepools at low tide. 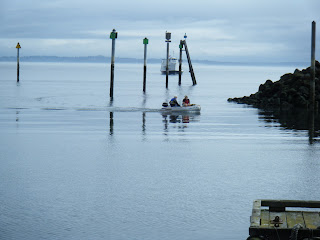 Matt & Dick dinghying in to the village. 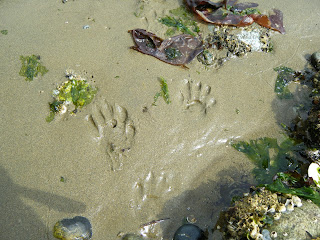 Raccoon prints were in evidence all over the beach. 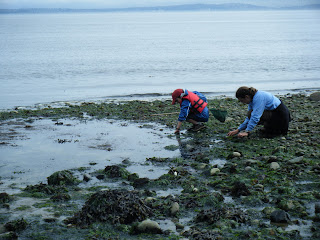 Amy and Liam exploring the beach. 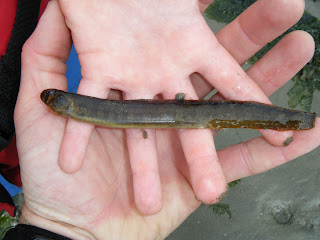 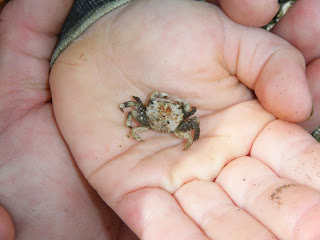 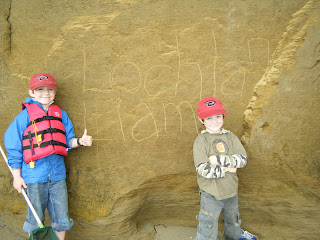 The boys discovered the sandstone cliffs are great for temporary graffiti.

Two months ago our boat partnership purchased RAVEN, a 1970 Cal-29. The LOA is just over 29', waterline length is 24', beam is 9'3", displacement right around 8,000 lbs, and she sleeps six adults. We purchased the boat from our friends Brent and Heidi, who connected us with the partnership. We are looking forward to improving our keelboat sailing and cruising skills this spring and summer.


A short video clip of our first sail. It was pretty breezy (15-20, gusting to 25) so we sailed under partially furled jib only (plus we had not yet learned how the jiffy reefing system works!). This resulted in a fair bit of lee helm, but she sailed beautifully.

Last night was the Salmon Bay Science Fair. Lochlan decided he wanted to participate, and after talking it over with Amy, chose 3 "kitchen chemistry" experiments/demonstrations. Amy did a fantastic job pulling together all of the materials and documentation, and Lochlan was a great helper.

The first demonstration was a comparison of a solid (carrot), a liquid (water) and Oobleck, a mixture of corn starch and water that is a non-Newtonian fluid. In other words, Oobleck behaves like a liquid when poured (it fills the container in which it's placed) but behaves like a solid when a force acts upon it, such as hitting it or trying to quickly jab your finger into it. That was a big hit with all the kids.

The second demonstration was inflating a balloon by filling it with baking soda, then placing it over a pop bottle filled with vinegar. This is a two-step or "double replacement" reaction, in which acetic acid (vinegar) reacts with sodium bicarbonate (baking soda) to produce a form of carbonic acid, which is unstable and breaks down into water and carbon dioxide. The CO2 inflates the balloon.

The third demonstration was really cool. It turns out red cabbages have a chemical in them that can serve as a pH indicator. The molecule is called flavin, which is an anthocyanin. Amy pureed some red cabbage and created a solution with water, and gathered a whole bunch of commonly found kitchen ingredients (onion powder, vinegar, cream of tartar, milk, etc). She brought a bunch of baby food jars and some water. The kids could choose which kitchen ingredient to place in the baby food jars, create a solution with water, then use an eye dropper to place the cabbage solution into the jar. Very acidic solutions turn the anthcyanin red or pink, neutral solutions will turn it purplish, and basic solutions will turn it blue or bluish green. This was a HUGE hit with all the kids, and one 1st grader named Elizabeth came by three times with her father to test different compounds. She said it was her favorite exhibit of the whole fair!

It was really wonderful to watch Lochlan explaining all of this and assisting the other students with the demonstrations. He had a great time and I think he'll want to do it again next year. :) 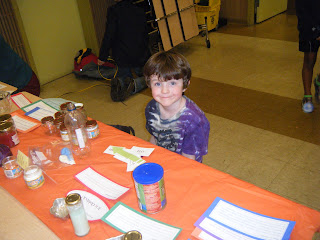 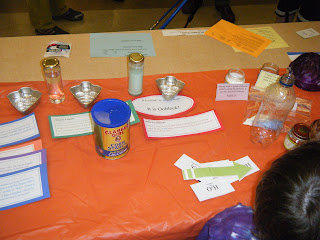 Work has gotten busy again and posting has suffered. One of the things I like best about this blog is that it serves as a historical record for the family and some of the various happenings and events that make our live so fun, interesting, and at times challenging.

So here is a post about our Spring Break Trip to Florida in April. Yes, Spring Break in Florida is a quintessentially American cliche, but this year we really really needed some sun. Fortunately, Amy has cousins with a condo in St Petersburg, we happened to have some free tickets on Southwest, the boys were both out of school for the same week, so off we went. And it was more fun than I could have imagined!

The boys went to Florida with their Grandma last June, and they had a great time. However (and I'm embarrassed to admit how proud this makes me) they were less interested in the theme parks than in the incredible biodiversity they experienced. Liam, in particular, was far more interested in Armadillos than Mickey, so this year, we didn't mention the theme parks and the boys didn't ask.

We spent the majority of our time at the beach, in the water, or on the water. The Tampa Bay area has some of the most beautiful beaches I've ever seen--powdery white sand, completely devoid of rocks, that extends for miles in all directions. The Gulf of Mexico is comfortably warm and has exactly the kind of luminescent aqua-marine color that I've daydreamed about during many a soaking wet winter bicycle commute. The marine animals and shore birds are completely different than what we're accustomed to on the west coast, which really helped to make us feel that we were in a new and (relatively speaking) exotic place. And the shells are abundant and beautiful! Lochlan really enjoyed shelling along the beach.

We did take one trip inland to look for Alligators, and boy did we find them! The airboat ride at Myakka River state park was top-notch--we saw dozens of alligators, some of them quite close, along with bald eagles, anhingas, and numerous species of reptile that I could not identify.

In addition to the airboat, we traveled on a pontoon to get to Caladesi Island, a large-ish power boat to get to Egmont Key, and we rented a Flying Scot to do a little sailing in Clearwater Bay. The flat water and steady breeze were a real treat.

Perhaps our best evening of wildlife viewing took place right across the street from the condo along the nature trail at Bay Pines. We saw Roseate Spoonbills, Yellow-Crowned Night Herons, a Little Blue Heron, Ospreys, dolphins, and--an Armadillo! Amy and I were starting to get worried that we'd never find one of these supposedly ubiquitous mammals, but thank goodness, there he was right near the trail. We got a really good luck, and Liam was ecstatic.

If the circumstances ever align so fortuitously again, I would definitely go back to southwest Florida. (Click on the thumbnails to embiggen the photos) 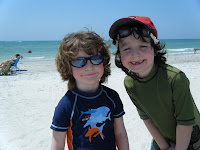 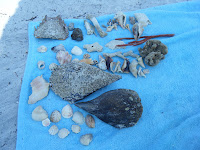 The treasures found during a productive afternoon of shelling on Caladesi Island. 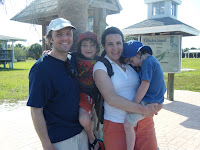 Waiting for the boat after a fun day on Caladesi Island. 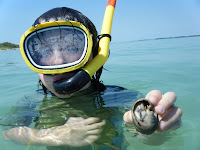 Liam with a hermit crab he found while snorkeling at Egmont Key. 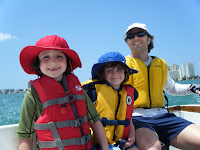 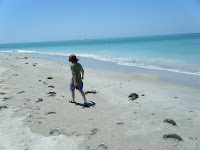 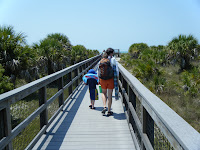 Amy and the boys heading for the beach on Caladesi. 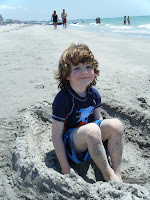 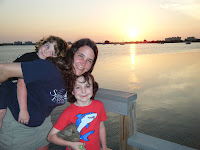 Amy and the boys enjoying a beautiful sunset at Bay Pines. 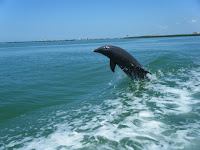 Atlantic Bottlenose Dolphin surfing the boat's wake on the way to Egmont Key. 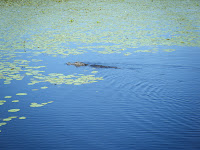 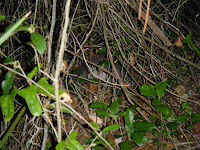 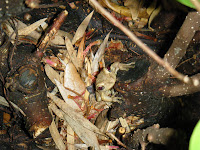 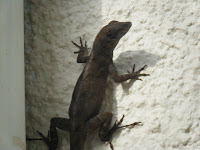 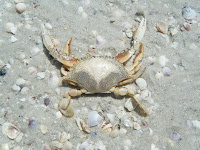